What is a Tongue Tie?

What is a Tongue Tie?

The phrase “tongue tied” is commonly used as a slang reference to someone stumbling over their words. However, tongue and lip ties (medically known as Ankyloglossia) can lead to serious complications in infants, adolescents, and even into adulthood if left untreated.

WHAT IS A TONGUE TIE?
Tongue ties are caused when the lingual frenulum (the membrane which connects the tongue to the floor of the mouth) is thick, short, or otherwise malformed, restricting the tongue from moving correctly. 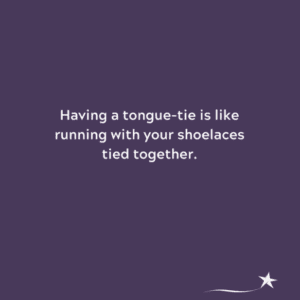 WHAT ARE THE ISSUES ASSOCIATED WITH TONGUE/LIP TIE?
– For infants, tongue tie or lip tie may mean unsuccessful breastfeeding or bottle feeding.

For infants born with tongue or lip tie, the restriction does not allow the lip to rest passively over the nipple for proper suctioning.
Symptoms you may notice can include:

– NURSING MOTHERS may find it difficult or painful to breastfeed.

Tongue and lip ties don’t only affect the infant. A baby’s tethered oral tissue can also cause physical and emotional issues for a breastfeeding mother, which could include:

– As BABIES GROW they may experience difficulty eating solid foods.

Tongue and lip tie symptoms in babies may include:

If left untreated, the problematic side effects of tongue and lip tie continue into adolescence and adulthood.
– CHILDREN may have difficulties with Speech.

The tongue has a remarkable ability to compensate, so a child may never show signs of difficulty at all. However, not all children are able to adapt and the signs and symptoms of a tongue and lip tie during childhood may include: